Thank you for visiting Subbutopia!

First of all, I claim to be no expert and there are countless Subbuteo devotees with far better collections. This is just my bit of fun which you are welcome to share.

Feel free to leave comments on the What's New page, or email me on subbutopian at gmail dot com 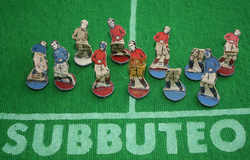 It all started for me in the mid sixties when my Dad gave me a few old New Footy players which had survived since his childhoood in the 1930s. Around the same time, I became obsessed by everything football after seeing England’s World Cup win in 1966, and in 1968 my parents gave me a Subbuteo Display Edition for christmas. This edition came with red and blue moulded teams, 2 goals and 2 large brown balls but didn’t come with a pitch, so my Dad stretched an old green woollen blanket over a wooden board and marked up the lines with white paint. 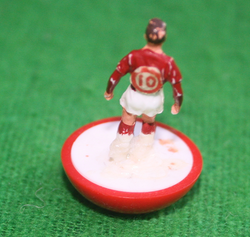 In 1969 my cousin generously donated his Subbuteo collection as he’d ‘outgrown’ it  and for the first time I became aware of the huge range of teams and accessories that were available.  All of a sudden I could play a variety of matches involving Newcastle, Wolves, Stockport County, Leeds and Partick Thistle. Actually, the Wolves was a Ref. 6 and the Stockport County was a Ref. 11, but I was blissfully ignorant.

The only survivor I still have from this era: Geoff Hurst in England kit.

As well as the teams, I had also been given a felt pitch and some small orange balls. This was a real eye-opener and introduced play to a whole new level – it was like moving from playing on a bumpy meadow with long grass to a perfect bowling green surface.

The first teams I ever spent my pocket money on were Ref. 50 Brazil and Ref. 53 Portsmouth. After the 1970 World Cup, who could resist Brazil, and in 1971 I saw my first ever match at Fratton Park. During these ‘golden years’ I bought just two other teams – West Ham from a boy at primary school – at last I could have Geoff Hurst playing at club level – and later a Ref. 47 which matched my secondary school kit.

It was at secondary school that I realised that I didn’t play Subbuteo properly. As an only child, I had adapted the game to suit solo play and created a turn-based game with no positional flicking. It was a great shock when I tried to play against friends who were flicking players all over the place while I was slowly and methodically playing in my own style. I didn’t bother to adapt to this new way of playing and inevitably always lost. In hindisght I think I reverted to a long ball game and relied on set pieces as I was totally out-manoeuvred in open play – the original Wimbledon FC. As well as an ‘advanced’ style of play, one friend had an exotic collection of 1974 World Cup teams that gave him legendary status amongst his peers - Chile, Haiti, Zaire and El Salvador - kits that still generate goose bumps.

So, by the mid-1970s I had 11 teams and that’s where the ‘golden years’ ended; along came other obsessions like girls, punk and beer and the Subbuteo was consigned to a cupboard out of sight and out of mind.

Fast forward to the end of the 1990s - I hadn’t given Subbuteo much though for over 20 years  and suddenly I heard that Subbuteo was to be discontinued. My own collection had been given away without my consent years earlier* and I went into a panic..... I wanted my own kids to experience the beautiful game. Off I went, straight to my local Gamleys and bought the last Subbuteo on the shelf, a Euro 96 boxed set edition.

(* apart from Geoff Hurst and the New Footy players who were hiding in the Monopoly set).

Opening the lid of the Euro 96 edition was horrendous – what had happened to that precious part of my childhood? Gone were the handsome heroes on little white bars to be replaced by weedy footballers with bad posture and even worse hairstyles fixed onto round pegs. Lightweights by name, lightweights by nature, what had the world come to?

Thankfully, along came ebay and opened up a whole new world and the opportunity to replace all those lost childhood toys. That was the first phase. Then came the realisation that I could have more teams than I ever thought possible......and accessories, including spectators and a stadium......an obsession was born.

Eleven years of ebay later and the collection has multiplied. I’ve stuck to a rule of never spending more than £15 on a single team – and was lucky enough in the early days to pick up some rarities when buying large bundles, including a Ref. 61 Northampton, a Ref. 33 Bishop Auckland and a Ref. 116 Southern Suburbs, which were sold on to fund other purchases.  It’s been hard to let these rarer references go, but this strategy has meant I’ve built this colllection up without spending much at all. It is much harder to pick up bargains on ebay now though and I know I’m going to have to paint my own replica teams if I want to avoid spending a fortune.